Covid-19: Race for Indian vaccine hots up, human trials on in 6 cities 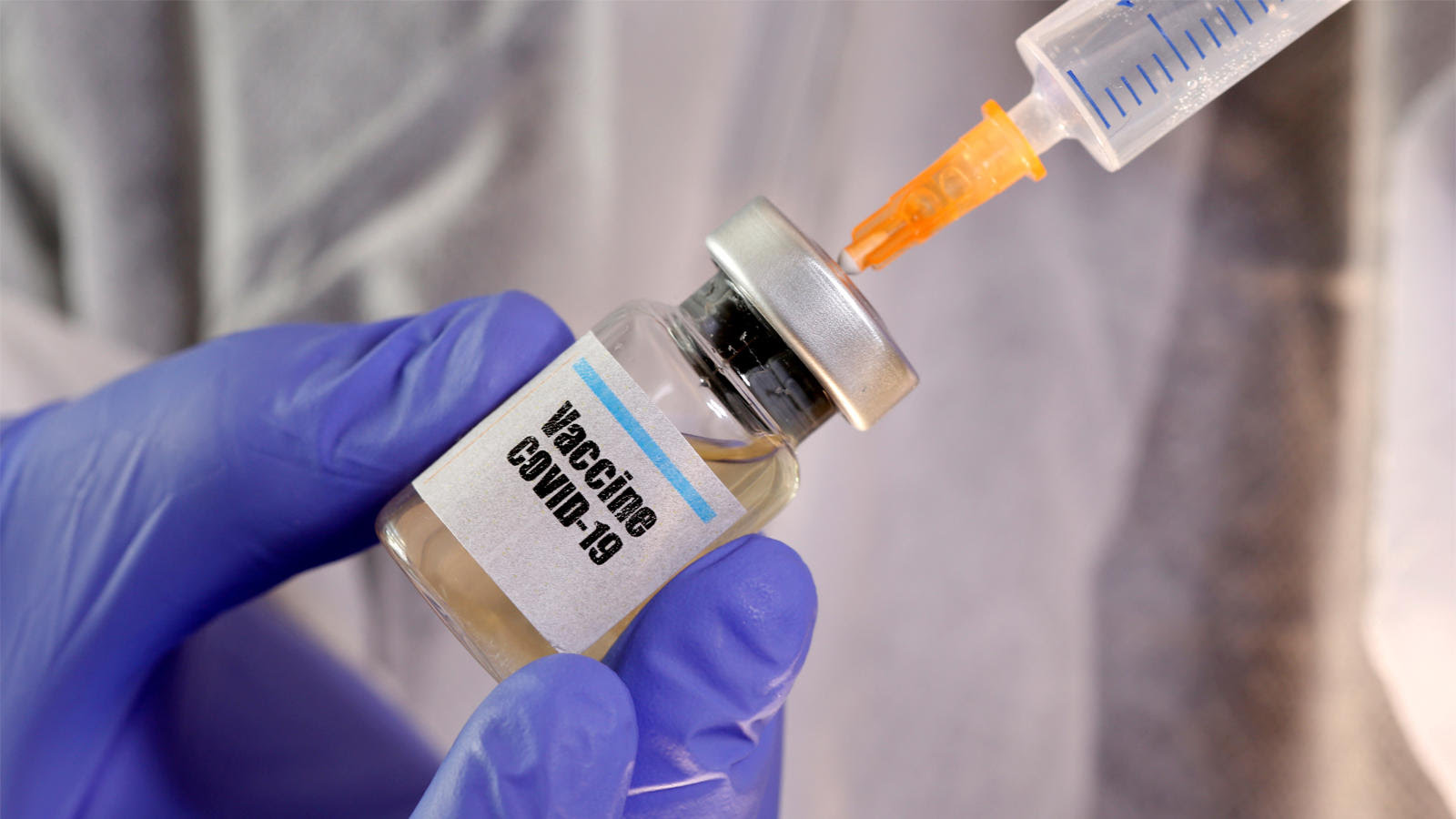 NEW DELHI: The race for an indigenous vaccine against the novel coronavirus is on in earnest. Human trials using the vaccine candidates of two companies — Bharat Biotech and Zydus Cadila — are currently on in six cities in as many states. The latest subject was a 30-year-old man who on Friday was the first person from Delhi to be given a 0.5 ml intramuscular injection of Bharat Biotech (BB)’s Covaxin at AIIMS.

Both BB and Zydus were granted permission for Phase I and II clinical trials and administered the first doses of their vaccine candidates to volunteers on July 15.

A third vaccine candidate, developed by Oxford University, is soon to be tested in India. Serum Institute, which is in a manufacturing partnership with the UK’s Astra Zeneca, has said it will begin human trials as soon as it receives regulatory approval.

BB’s Covaxin, developed in collaboration with the Indian Council of Medical Research (ICMR) and the National Institute of Virology (NIV), will be tested at 12 hospitals — including AIIMS, Delhi and Patna, and PGI Rohtak — in 12 cities. The first phase will involve over 500 volunteers, all healthy and between the ages of 18 and 55 with no co-morbidities.

Testing of Zydus’s candidate, ZyCoV-D, is currently limited to its research centre in Ahmedabad, but will be extended to multiple cities. 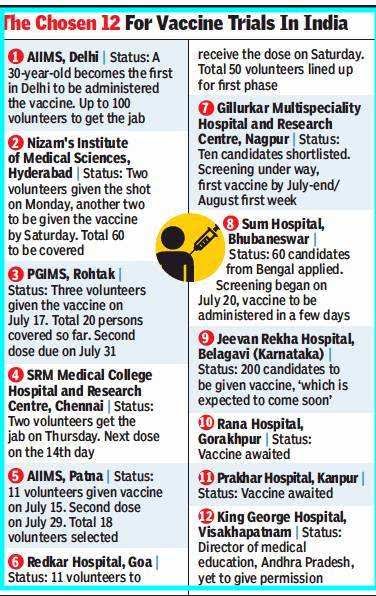 At AIIMS, Delhi, Dr Sanjay Rai, principal investigation of the vaccine trial project, told TOI, “We observed him (the 30-year-old subject) for two hours. There was no immediate side-effect.” He said the volunteer has been allowed to go home for now and he will be examined again after two days.

AIIMS Patna, which started human trials of Covaxin on 11 volunteers on July 15, has not encountered any major side-effects in volunteers. The results of the first dose are yet to come in.

“There are some minor side effects – like redness of skin where the dose was given, pain and mild fever – which can be seen in any vaccine test. But it went smoothly without any other health issues. The doctors are continuously monitoring their health,” said AIIMS-Patna director P K Singh, who’s heading the human trials. “The second dose will be given on July 29, after we’ll run some tests to make sure that the first dose had no side-effect. We will see how much antibodies developed,” he said, adding that 18 persons have been shortlisted for the trial and only seven more people are left for the first dose, “which we will complete in the next few days”.

The Post-Graduate Institute of Medical Sciences (PGIMS) in Rohtak has readied 20 volunteers and administered the first dose to three people on July 17. State nodal officer Dhruva Chaudhary said Rohtak’s PGIMS and Patna's AIIMS have enrolled 20 subjects each so far. “None of the 20 volunteers showed any adverse impact of the vaccine. We are planning to start the second phase of human trials soon,” he added. Dr Savita Verma, the trial’s principal investigator at the institute, said the first batch is to be given a second dose on July 31.

Human trials at SRM Medical College Hospital and Research Centre in Kancheepuram, near Chennai, began on Thursday with two volunteers being administered 0.05 ml of the vaccine each. They will get the next dose on day 14. The volunteers will have to visit the hospital for follow-ups on days 28, 42, 104 and 194 when their response to the vaccination will be assessed by immunogenicity testing.

“It will be a seamless phase, which means at some point in Phase I the data will be analysed, and the sponsor and the committee members will decide on Phase II based on that. So, while Phase I is still underway, Phase II trials will begin,” said Dr Satyajit Mohapatra, principal investigator for the human clinical trials at the hospital. While every volunteer will be monitored for a period of six months, Dr Mohapatra said the phase will continue till the 500-plus volunteers (across 11 cities) are recruited, given doses and complete the observation period.

Phase I trials involve studying the safety of the vaccine in a healthy individual and will decide the right dosage that will be effective against the virus.

Nagpur’s Gillurkar Multispecialty Hospital and Research Centre, the only site for human trials of Covaxin in Maharashtra, is expected to start Phase 1 by “July-end or latest in the first week of August”, said Dr Chandrashekhar Gillurkar, the centre’s director. “We have … shortlisted 10 persons as per protocol. Screening is currently underway. We are checking their vital health parameters and taking blood samples for further testing in New Delhi,” he said, adding it would take up to four days to complete screening.

Bhubaneswar’s Institute of Medical Sciences and Sum Hospital, a privately-run medical college, started screening prospective candidates on July 20. The actual administering of the vaccine will take some more days as the volunteer’s blood samples are being sent to Delhi, said E Venkata Rao, principal investigator in the trial. About 60 volunteers from West Bengal have applied for the Phase I trial in Bhubaneswar, while a few have also applied for trials in AIIMS, New Delhi.

Clinical trials are yet to begin at Jeevan Rekha, a multispecialty hospital in Belgaum, about 450 km from Bengaluru, where Covaxin will be tested on around 200 healthy volunteers in and around Belgaum. Hospital sources said the vaccine had not yet arrived. “It is expected to come soon,” a source said.

In Hyderabad, two young male volunteers aged below 30 years were given vaccine doses at the Nizam’s Institute of Medical on Monday. A third volunteer (from at least 60) will be given a shot in the next two days.

Eleven volunteers from Goa will receive doses of Covaxin in Phase I starting at 10 am on Saturday. A batch of four volunteers will be injected at 10 am and a second batch of seven has been called at 12 pm, said Dr Dhananjay Lad, director at CROME Clinical Research Private Ltd and Medical Tourism, the agency selected to conduct human trials at Redkar Hospital. Dr Lad said Phase I will involve 50 volunteers. Registration of volunteers started on Tuesday at Redkar Hospital.

Gorakhpur’s Rana Hospital and Trauma Centre is waiting for the vaccine to start human trials. “We are ready with volunteers but we have not yet confirmed how many vaccines are coming to us. We’ll start as soon as the vaccine reaches us,” the hospital’s chief administrative officer, Venketesh Chaturvedi, said 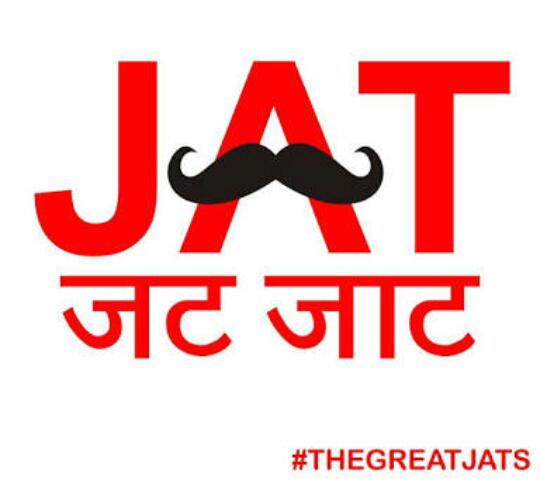 Popular of the YEAR